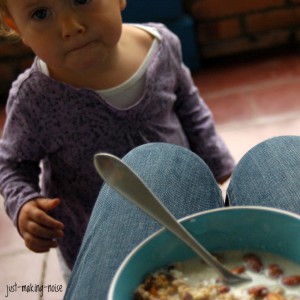 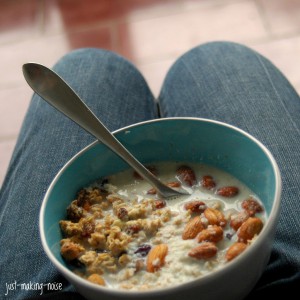 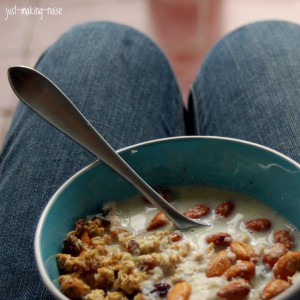 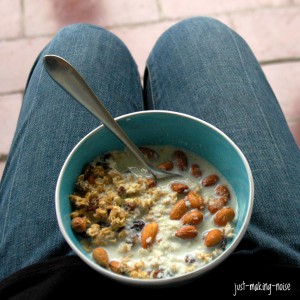 UPDATE: I discovered a new cereal using honey roasted chickpeas! They are delicious and stay fairly crunchy up to the last bite. Check out my Crunchy Roasted Chickpea Cereal!

Hello everybody! Here’s a quick and nourishing cereal that I whipped up the other morning using my ‘Ready & Soaked’ Oats… so yummy! It looks somewhat like granola, but I think it’s not :o)
I am loving having these oats in hand… made cookies and now this cereal, I have more ideas brewing in my head! I woke up not really feeling like having eggs or toast or anything special. Looking around my fridge, I saw the oats and this idea popped in my head… have some cereal!

It has been SO LOOONG since I had a bowl of cereal.
Now, if most of you are following the Nourishing Traditions diet… you know that cereal is NOT the ideal breakfast. Even if it is organic and whole grain… it is still processed food that is hard for the body to digest. Not exactly a nice way to “wake up” your digestive system for the day. Most of you have read the importance of soaking your grains before consuming to increase nutritional value, decrease the number of antinutrients and make it more digestible. Here’s a sound bite from a great article by Sally Fallon:

Dry breakfast cereals are produced by a process called extrusion. Cereal makers first create a slurry of the grains and then put them in a machine called an extruder. The grains are forced out of a little hole at high temperature and pressure. Depending on the shape of the hole, the grains are made into little o’s, flakes, animal shapes, or shreds (as in Shredded Wheat or Triscuits), or they are puffed (as in puffed rice). A blade slices off each little flake or shape, which is then carried past a nozzle and sprayed with a coating of oil and sugar to seal off the cereal from the ravages of milk and to give it crunch.

In his book Fighting the Food Giants, Paul Stitt tells us that the extrusion process used for these cereals destroys most of the nutrients in the grains. It destroys the fatty acids; it even destroys the chemical vitamins that are added at the end. The amino acids are rendered very toxic by this process. The amino acid, lysine, a crucial nutrient, is especially denatured by extrusion. This is how all the boxed cereals are made, even the ones sold in the health food stores. They are all made in the same way and mostly in the same factories. All dry cereals that come in boxes are extruded cereals.

The only advances made in the extrusion process are those that will cut cost regardless of how these will alter the nutrient content of the product. Cereals are a multi-billion dollar business, one that has created huge fortunes.

With so many people eating breakfast cereals, you might expect to find some studies on the effect of extruded cereals on animals or humans. Yet, there are no published studies at all in the scientific literature. – Dirty Secrets of the Food Processing Industry

The article continues on by sharing about 2 separate studies that were never published… something wrong here?! In both studies, rats who lived on processed cereals lived shorter lives than those who didn’t. In fact, during one study… they discovered that the rats who ate the cardboard box that the cereal came in lived longer than the rats who ate the cereal! Honestly, we would be better off throwing out the cereal and eating the box it came in… Read on:

Let me tell you about two studies which were not published. The first was described by Paul Stitt who wrote about an experiment conducted by a cereal company in which four sets of rats were given special diets. One group received plain whole wheat, water and synthetic vitamins and minerals. A second group received puffed wheat (an extruded cereal), water and the same nutrient solution. A third set was given only water. A fourth set was given nothing but water and chemical nutrients. The rats that received the whole wheat lived over a year on this diet. The rats that got nothing but water and vitamins lived about two months. The animals on water alone lived about a month. But the company’s own laboratory study showed that the rats given the vitamins, water and all the puffed wheat they wanted died within two weeks—they died before the rats that got no food at all. It wasn’t a matter of the rats dying of malnutrition. Autopsy revealed dysfunction of the pancreas, liver and kidneys and degeneration of the nerves of the spine, all signs of insulin shock.

Results like these suggested that there was something actually very toxic in the puffed wheat itself! Proteins are very similar to certain toxins in molecular structure, and the pressure of the puffing process may produce chemical changes, which turn a nutritious grain into a poisonous substance.

Another unpublished experiment was carried out in the 1960s. Researchers at University of Michigan were given 18 laboratory rats. They were divided into three groups: one group received corn flakes and water; a second group was given the cardboard box that the corn flakes came in and water; the control group received rat chow and water. The rats in the control group remained in good health throughout the experiment. The rats eating the box became lethargic and eventually died of malnutrition. But the rats receiving the corn flakes and water died before the rats that were eating the box! (The last corn flake rat died the day the first box rat died.) But before death, the corn flake rats developed schizophrenic behavior, threw fits, bit each other and finally went into convulsions. The startling conclusion of this study is that there was more nourishment in the box than there was in the corn flakes.

This experiment was actually designed as a joke, but the results were far from funny. The results were never published and similar studies have not been conducted.

Most of America eats this kind of cereal. In fact, the USDA is gloating over the fact that children today get the vast majority of their important nutrients from the nutrients added to these boxed cereals.

Cereals sold in the health food stores are made by the same method. It may come as a shock to you, but these whole grain extruded cereals are probably more dangerous than those sold in the supermarket, because they are higher in protein and it is the proteins in these cereals that are so denatured by this type of processing.

There are no published studies on the effects of these extruded grains on animals or humans, but I did find one study in a literature search that described the microscopic effects of extrusion on the proteins. “Zeins,” which comprise the majority of proteins in corn, are located in spherical organelles called protein bodies. During extrusion, these protein bodies are completely disrupted and deformed. The extrusion process breaks down the organelles, disperses the proteins and the proteins become toxic. When they are disrupted in this way, you have absolute chaos in your food, and it can result in a disruption of the nervous system. (bold & italic areas made by mare)

I don’t know about most of you, but back when I ate cereal… I would always feel tired and sick to my stomach afterwards. Even when I switched over to organic cereals, I still felt yucky and sometimes worse then before. The only “cereal” that is an exception is Ezekiel 4:9 Sprouted Whole Grain Cereal, which I’ve tried and enjoyed occasionally… but it is a bit pricey for us.

Now, I know why I felt so bad after eating cereal… my body was screaming at me to stop. eating. that. stuff! I don’t miss cereal anymore because I’ve learned to live without it and am now enjoying more nourishing breakfasts like crepes, smoothies, oatmeal, muffins, pancakes, fritatas & more! What do I need cereal for?!
Ah… yes… well… I know most will say it is… convenient… my hated word. I’ve learned that oatmeal can be made in minutes if soaked overnight. Time-wise, how is frying a few eggs any different from prepping a bowl of cereal?
Really, which is more important… convenience or nourishment? But there is a way to make nourishing food convenient…
So, here I am… happy to share with you a nourishing cereal that left me feeling satisfied and energized all morning! It is so simple that it can be labeled “convenient” and you can totally create your own mix ins. That morning I made a mixture of dehydrated almonds, raisins, coconut flakes, cinnamon, freshly ground flaxseed and raw honey with the ‘Soaked & Ready’ Oats. I warmed up my raw milk and poured it over my cereal, creating an almost “instant” oatmeal! It wasn’t much different from eating oatmeal porridge. You can use cold milk… which I made last night for a night snack and it was perfect! 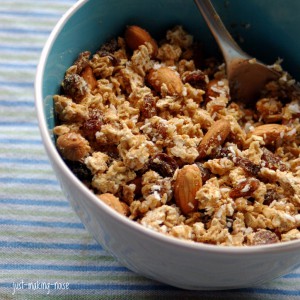 Quick, Raw & Nourishing Homemade Cereal
Mix all the dry ingredients in a bowl. Drizzle raw honey over the mixture and stir some more. Pour your choice of milk (warm or cold) over the cereal and ENJOY!
Be creative or make your favorite!

A wise person is hungry for knowledge,
while the fool feeds on trash.

This is part of the Pennywise Platter Thursday…
This post may contain affiliate links. If you purchase a product through an affiliate link, your cost will be the same but I will receive a small commission. The commissions I receive goes to support my family, our ministry and helps keep my blog going. Thank you for your willingness to use the links to support us & help me keep Just Making Noise going!
« Sweet Wholesome Wednesday Special Guest: Divina Pe
Leek, Tomato & Rosemary Fritata »